The 10th International Workshop on HIV Pediatrics, held July 20 to 21, 2018 in Amsterdam, The Netherlands, is entirely devoted to research in prevention and treatment of HIV infections in infants, children and adolescents, making it a premier forum for the world’s leading experts in pediatric, adolescent and maternal HIV research. The 22nd International AIDS Conference, also held in Amsterdam, from July 23 to 27, is the world’s largest conference on AIDS, biennially bringing together leading experts to advance knowledge about HIV. Several networks with whom Frontier Science collaborates, including the IMPAACT, ACTG, and PHACS networks, were highlighted in Amsterdam this year, and Frontier Science was acknowledged as one of the affiliated organizations working on the HIV studies.

On Sunday, July 22, UCLA and Frontier Science co-hosted a well-attended pre-conference, “Blood, Guts, & Glory,” funded through the National Institute on Drug Abuse (NIDA) funded C3PNO project. The C3PNO project is a collaboration between 9 NIDA U01 cohorts, UCLA, and Frontier Science. Sue Siminski, Co-Principal Investigator, presented a preview of a virtual repository application in development at Frontier Science, which links laboratory, clinical, substance use, behavioral, and biological data to improve the accessibility of NIDA-funded data and specimens from C3PNO cohorts to researchers. The C3PNO goal is to stimulate research with outside investigators and encourage new collaborations with international cohorts studying substance use in the context of HIV pathogenesis. Dr. Soyeon Kim, Senior Biostatistician, and Adina Stoica, Software Project Manager, also represented Frontier Science at the pre-conference.

Pearl Samson, Senior Statistician, Frontier Science Boston, supported a paper presentation on the IMPAACT P1101 study titled: “Phase I/II Study of Raltegravir-containing Regimen in HIV And TB Co-treated Children Aged 6-< 12 Years. Pearl is the second author on the paper, and has been working with the study for the past seven years. Linda Marillo, Laura Hovind and Kayla Denson from the Frontier Science Data Management Center also worked on this poster. P1101 Paul Krogstad, Study Co-Chair, outlines the importance of the results from P1101:

Carmelita Alvero, also Senior Statistician from FS Boston, collaborated on a poster for IMPAACT P1093 entitled: “Emergence of Resistance in HIV-1 Integrase Following Dolutegravir (DTG) treatment in 6 to <18-year-old participants enrolled in the P1093 study.” Among other contributors listed on this poster are Stephanie Popson, Protocol Data Manager from FS Amherst, and Dr. Terry Fenton from FS Boston. 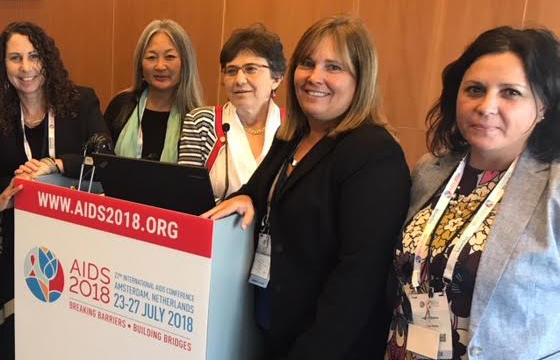 Pearl Samson expressed gratitude for the opportunity to participate in these conferences. “I’m very grateful to have had a chance to attend both the 10th International Workshop on HIV Pediatrics and AIDS 2018, not just to support the presentation of the results of our study, and hearing the scientific sessions, but more importantly to personally see how our research efforts over the past decades have touched the lives of infants, children, adolescents, and mothers.”

Adina Stoica, Software Project Manager for the C3PNO virtual repository, returned inspired and uplifted by the experience of the IAS conference. “Everyone’s contribution matters, all of us who work on these projects,” said Adina.

Labelscape: A Mobile App for Creating and Printing Specimen Labels

Frontier Science is pleased to announce the release of Labelscape, a new Android and iOS app for creating and printing specimen labels. Read more

The OlympiA Phase III trial of AstraZeneca and MSD’s Lynparza (Olaparib) will move to early primary analysis and reporting following a recommendati... Read more
See All